Game Master Toolkit: When There’s No Time to Plan

Game Mastery is hard.  It takes preparation and planning.  It comes with that whole added stress of trying to avoid creating a plot hole because you forgot something from three sessions ago and your players have memories like supercomputers all of a sudden.  Because of this, it’s much easier to take short cuts when you don’t have time to plan.  Here are some devices that you can set up in your game so that when life makes it so that you don’t have time to plan, you’re not stuck throwing random encounters at your players for multiple sessions.

Not literal anchors.  That would be silly.  In this case, anchors are locations that matter to the players, and they are volatile if they have a reason for a plot hook to show up without warning.  A well-built anchor can be a real lifesaver when you don’t have time to build a new place to adventure.

The benefits of a volatile anchor is that, if you have them already set up, they provide a skeleton for the adventure without you having to build anything new.  The players aren’t likely to ask too many questions about the location because they’ve been there before, meaning that all you have to explain is the latest event.  If you’ve built it right, you won’t even have to put a ton of thought into the enemies that you use.

Another benefit of setting up a volatile anchor is that you can make them very important to the plot, so that returning there doesn’t always feel like filler.  Hell, you can plan your campaign around the anchor location if you’re worried about having time to build an entire world.

-The excavation site of powerful artifact.  Recommended enemies: hellspawn, or any subterranean creature.

-A wall between civilization and a realm of evil, or even just an enemy faction during wartime.  Recommended enemies: You can use anything here.  War is hell, and hell is war, and all is fair in that sort of thing.

Some entire campaigns are set at volatile anchors.

No, not the awesome roguelike from Kitsuntegames, as awesome as that may be.  This time I AM referencing the guy from Disgaea who shows up repeatedly.  In this case, the Midboss represents a recurring enemy who regularly schemes and has a knack for escaping when the heroes get close to nabbing him.  He may be your lead antagonist, or he may be a lesser villain who is important but who you can afford to have caught if the players manage to nab him.

A good midboss should be established as someone capable of enacting his own plans, or at least very competently enacting the plans of his employer.  In fact, these characters should probably be given a different title than midboss, as that definitely doesn’t imply a schemer, but I like the reference so whatever.

The big benefit of a midboss is that you don’t have to create a new threat.  If your midboss is “Lucille the Illusionist,” for example, then you already have a framework to build the majority of encounters around.  Even if you’re lazy and don’t want to stick with a theme, there’s no reason a spellcaster of any kind can’t keep more random beasts in their employ.  The important thing is that suddenly it’s set within a framework that makes the players feel like they’re in a consistent adventure without a whole bunch of filler.

-The illusionist:  Build a lot of traps that bedazzle and confound, with enough real enemies and threats thrown in that that the players can remain confused about what is real and what is fake.

-The Artificer: All of their threats are real, and they rely far more heavily on traps than they do on creatures.  The enemies they use will often be mechanized, constructs and clockwork contraptions rather than beasts or henchmen.

-The necromancer: You should know what we’re dealing with here.  He comes with his army of walking corpses and might even be a little less than alive himself.  These guys are pretty easy to set up, good to use if you don’t have a lot of time to set up your midboss.

What’s that?  You didn’t set up an anchor or a midboss?  It’s ok, there are still some exciting things you can throw at your players without them realizing that you’re just prioritizing those valuable sleep hours over writing the next part of the plot.  These last two, work best if they’re either very consistent with the themes of the campaign or if you say something like “I feel like a change of pace.”

The treasure hunt is exactly what it sounds like.  I recommend you build a macguffin early on to be “discovered” so that the players can go after it.  Alternatively, if the players aren’t in the middle of a lengthy journey to stop their own long-term villain, you can literally just have someone send them to recover some treasure.  After all, bills gotta get paid even when there’s not evil afoot.

Unlike the anchor or the midboss, this requires you to build a new location for your players to go to.  This means giving that location a place in your world and making sure it feels like it belongs.  What it does save you, though, is the trouble of writing any kind of story beyond “go into the dungeon and get the things.”  This can be a good way for you to take a break from in-depth writing and can give your players a chance for a simpler, but still exciting, adventure.

-The macguffin:  This is a hunt for a specific and important treasure.  The staff that can destroy the dark wizard’s barrier, the rings that will protect the heroes from the evils of the abyss, that sort of thing.

-The relic:  Not necessarily important for any overarching storyline, this treasure is still very important to somebody.  Maybe it’s a player, maybe it’s an important NPC, or maybe it’s just a powerful weapon that the players expect to be useful.  Examples include genie’s lamps, mystic tomes, or very powerful magical swords.

-The hoard:  Unimaginable wealth, the likes of which would baffle even King Nole (That’s for you, one percent of the population that remembers Landstalker)!  This is what the players likely got into adventuring for!  This one is simple, but remember to be careful with it.  After all, it’s not good form to rip the prize from your heroes. 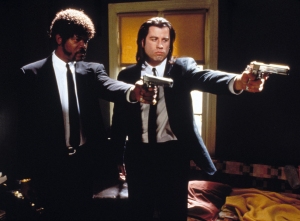 This entire scene happened because the GM was out of ideas.

Disasters are pretty easy to improvise when you’re playing god.  These can be natural disasters or monster attacks.   The downside is that these will almost always feel like filler, which is what you’re trying to avoid.  However, if you handle it right you can bill it as something you’re doing for a “change of pace” and not because “planning was getting in the way of taco night.”

As I said earlier, a disaster can take many forms.  Unstoppable monsters, spontaneous portals to another dimension, undead pirates raiding a port city, and who knows what else.  The qualifier for one of these disasters is that it is both dire and urgent, so the players will be compelled to drop whatever storyline they were pursuing that you haven’t actually finished and save the city from the earthquake or whatever.

Disasters work best in populated areas, but they don’t have to be in a place the players necessarily care a whole bunch about personally.  They also provide new ways to challenge the players because it can become less about defeating an enemy and more about making sure that the population of civilians doesn’t get eaten or swallowed by a land-bound deathshark or something.

The drawback of using a disaster when you don’t have time to plan is that players will catch on to it quickly if you do it more than once.  The benefit, though, is that you’re expected to do more improvising already and you can basically throw random encounters disguised as something more meaningful to the players.

-The Big Monster:  Whether it’s a dragon, a giant squid, or even the Tarrasque, a big monster is an immediate threat that you can throw at the players.  You can even set it up in your world ahead of time as an ace in the hole, either as a sleeping beast that legends speak of or as a secret weapon that the big bad keeps locked up.  This way, it feels like less like you pulled it from thin air and more like it’s part of the plan.

-The Portal:  A portal opens between the city and another location.  It could be another dimension, the Underdark, a warring nation, who knows!  But it’s there and bad stuff is pouring out.  This is another one that can be hastily tied into whatever story arc you have going on, so long as the enemies you have planned have the capabilities.

-The actual, you know, disaster:  Earthquakes!  Typhoons!  Tsunami!  Not only are these things that end up requiring immediate attention but they are also a good opportunity to throw things besides monsters at your party.  Sure, you’re geared up to handle swinging a sword like nobody’s business, how do you handle fissures opening up under you and trees falling on people?  There’s not much to keep this from seeming like filler, but it’s still a fun thing to throw in.

This one too. Did the GM of Pulp Fiction EVER plan his campaign?

So there you have it, a few things you can set up for your campaign so that when you don’t have any time to plan you can pull them out instead.  I only provided frameworks here, but I may add some specific examples to pull from in a later entry.  In the meantime, take these and have fun.

← Special Treasures: Alternate Rewards for Your Pathfinder Game
1d6 Investigators per Turn: A Look at Call of Cthulhu →